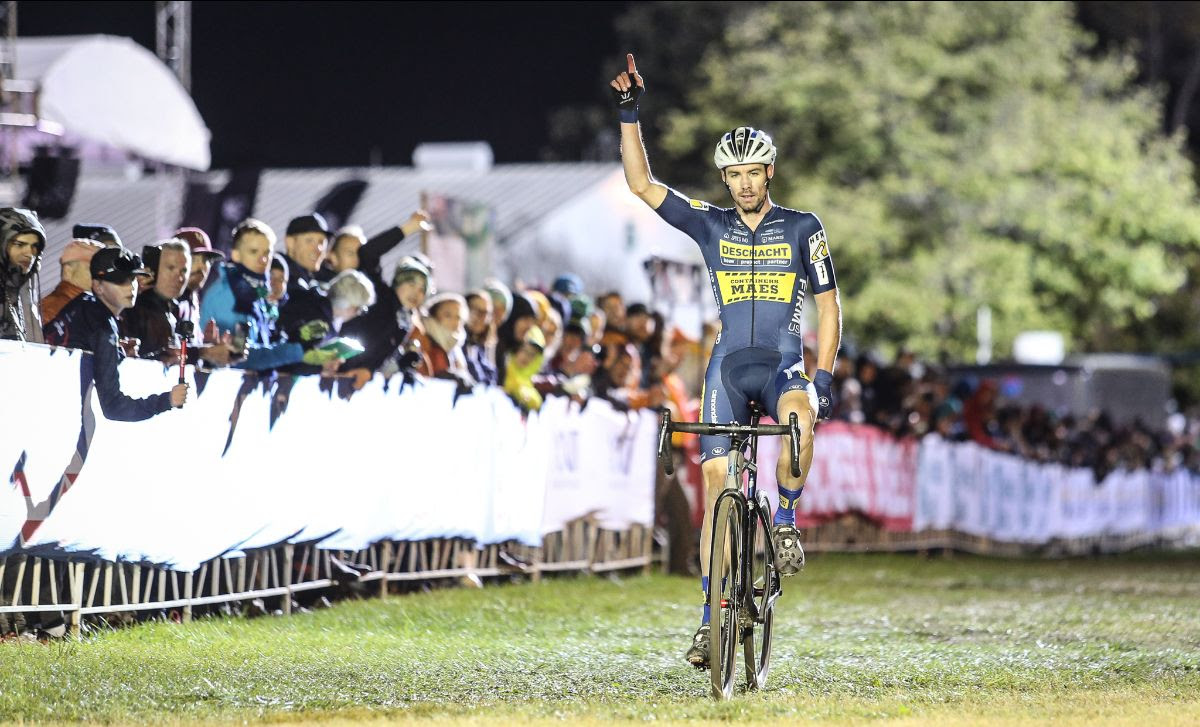 Vincent Baestaens (CX Team Deschacht-Group Hens-Maes Containers) won the UCI C1 elite men’s race under the lights on the opening day of Jingle Cross in Iowa City, Iowa, sweeping all three C1 races in which he has competed in the US this season.

Baestaens was in chase mode for most of the 12-lap Musco Friday Night Frights – River Products Company Chris Lillig C1 race and said he “was just lucky today” so he could continue his US streak.

“I have lucky [bib] number seven today because the other two guys were stronger than me, but sometimes you need to have luck,” said Baestaens. “I changed bikes with three laps to go, in my mind it was already over, then the other guy [Brunner] came to me and said ‘push’ so I kept pushing and saw they were doubting each other and I said I can close the gap. On the last lap, they crashed in front of me, and I came past them.”

Brunner set the early pace before a slip of gears the second pass up the signature course climb, Mt Krumpit. He then joined Baestaens and Thijs Aerts to chase solo leader Ferdinande.

The American suffered a second mechanical on lap six that knocked him out of the lead group. Then Ferdinande slipped in a corner which allowed Aerts to catch on, with Brunner powering back to Baestaens in a fight for what looked like a bronze medal spot.

Baestaens made his move to join the leading duo on the final lap, where Aerts crashed on the Mt Krumpit climb and took down Ferdaninde and the Belgian surged ahead for the victory.

Friday’s victory was also his fifth overall for the year, having swept C2 races at Rochester Cyclocross and Charm City Cross, which keeps him in a solid first-place position in the USCX Series, 30 points ahead of Kerry Werner (Kona Maxxis Shimano) with three races to go. He will sit out the C2 contest on Saturday to focus on the third round of the World Cup series on Sunday.