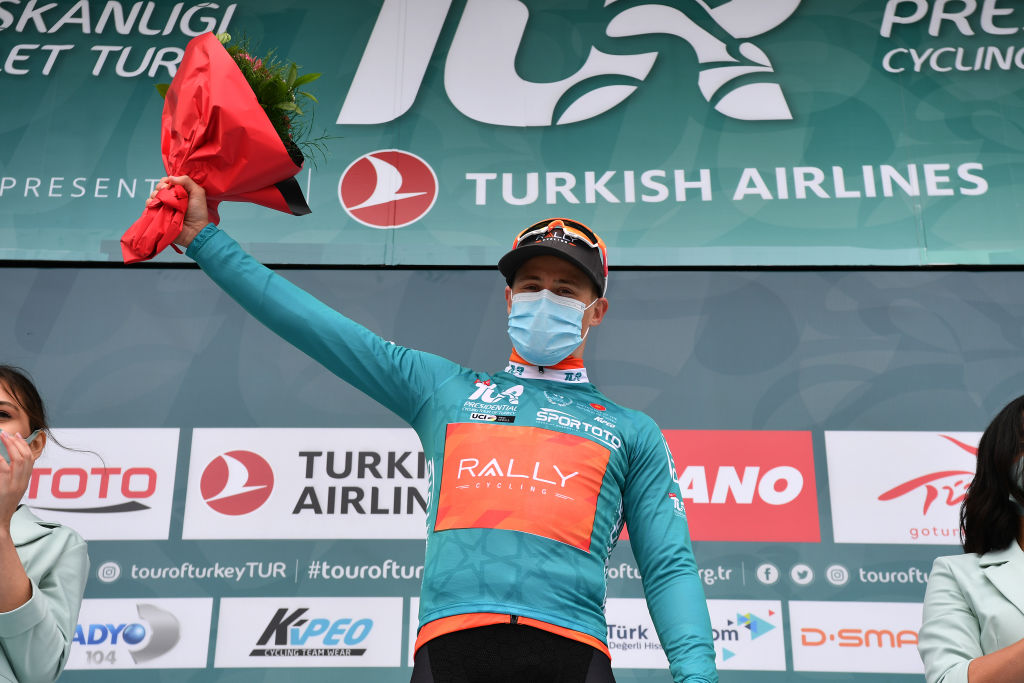 Dutchman Arvid de Kleijn delivered a surprise victory  for his new team Rally Cycling  with an impressive victory over hot favourites Mark Cavendish (fourth), Jasper Philipsen (fifth) and André Greipel (sixth) at the end of stage 1 of the Tour of Turkey  in Konya after the stage was relocated to Konya due to excessive amounts of snow in Cappadocia.

It was a tight finish against Norway’s Kristoffer Halvorsen but the photo finish confirmed de Kleijn as the winner.

“I’m really happy for the team that we can win the first stage of the Tour of Turkey. I think it’s great for us. The road was going a little bit up and I was finding some power.

“It was a long sprint, like 400 metres. It was really close with Halvorsen. I was not sure if I’d won and he was also not sure. I think it was a nice sprint finish like that. I didn’t see where Cavendish and Philipsen were. I just went for it.”

The photo-finish was carefully studied to confirm de Kleijn as the winner, his first time since he became the first European to join Rally Cycling. The American ProTeam was on the search of a sprinter for 2021 and opted for the Dutchman of Danish outfit Riwal.

“Things have been crazy with Covid last year and again this year. The race schedule has been difficult for us. To secure a good race programme, it’s been a lot of challenges. We kind of needed this win to build some confidence and momentum for the programme, so it’s hard for me to express how important this victory is for the team.

“I’m not surprised by this victory,” McCarthy added.

“I really believe in this kid, Arvid. He’s a big talent. He’s had a really good results those last few years. We’re really happy to have him on the team. It’s nice to finish ahead of some of these big names. But I’m not surprised that he was able to do it. Arvid is very capable of this type of result. His form for this race was a little bit unknown but he’s been training very hard and he’s a very motivated person. He prepares himself really well for the races.”

The unknown came from his season being put on a halt after an accident.

“I had a nasty crash at Clasica de Almeria and I had a problem with my neck,” de Kleijn explained.

“I had to take a month off. Now this is my second race after that. It’s just great to be back. It’s also nice to start this way with a new team. I can do something for my new sponsors.

“This is the real start of my season. It’s hard to say how far I can go. This is a good beginning. We’ll see what happens in the coming days. After the Tour of Turkey, maybe my engine is a bit bigger. I’m a pure sprinter. I love high speed sprints like today.”

De Kleijn’s compatriot Ivar Slik of Ablock CT, who took the King of the Mountains prize of stage 1, was happy to hear of the identity of the winner.

“He’s small and very strong. He’s a fighter in the peloton. He’s known as “the little gorilla”. He’s also very fast on a hilly terrain. He can also win on fast and flat finishes like today. He’s a really sprinter, still young. He can grow to a world-class sprinter.”

The real “gorilla”, Andrei Greipel, holds the all-time record of stage victories at the Tour of Turkey.

One of them also took place in 2016 in Konya, a heartland of Turkish cycling seldom visited by the Tour of Turkey.

Stage 2 is also scheduled in Konya – as initially planned – and the two gorillas will have an opportunity to go head to head.