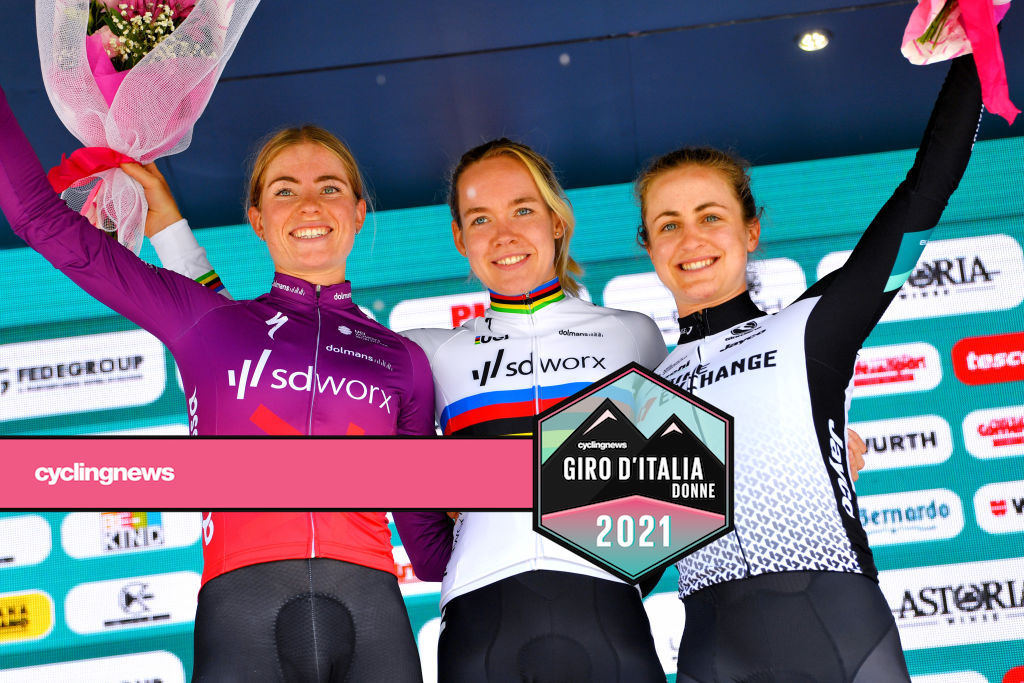 Anna van der Breggen (SD Worx) has built an almost unassailable lead in the overall classification following her victory in the stage 4 mountain time trial at the Giro d”Italia Donne. The World Champion said she was in a vert comfortable spot with such a strong team around her as she pursues a fourth maglia rosa in what is her final year before retirement.

“I’m in a very luxury position to have the girls around me and it’s really nice to race with them,” said Van der Breggen. “And also for my last year to do it like this is nice. But still we are only halfway and you still need to have good legs, I mean, there are also flat stages coming up and some hard climb stages. So, hopefully it stays like this but I think for sure we have to fight for it.”

Van der Breggen won the uphill time trial to Cascate de Toce on stage 4 of the Giro d’Italia Donne with a margin of 1:05 to her SD Worx teammate Demi Vollering. The imperious performance has increased her GC lead to 2:51 ahead of teammate Ashleigh Moolman Pasio, while Vollering holds third position overall at 3:03 back.

Speaking after the stage, Van der Breggen said the event was solid rehearsal for the upcoming Olympic Games, where she will line up as the defending champion in the road race on July 25 and then compete in the time trial on July 28.

During the mountain time trial on Monday, Moolman Pasio got off to a fast start, coming through the first intermediate checkpoint six seconds faster than Grace Brown (BikeExchange), who had been in the hot seat for almost two hours since posting an impressive time of 26:14. Brown ended up holding onto third place on the day. Despite a  fast start, Moolman Pasio lost time on the last section of the route and finished fourth.

As leader of the general classification, Van der Breggen was last to set off on the 11.2-kilometre climb and quickly set about blowing Brown’s time out of the water, coming in with a time of 24:57. She has not won an individual time trial at the Giro d’Italia Donne since 2015, when she won the 21.7-kilometre event from Pisano to Nebbiuno.

Van der Breggen’s lead on the race is looking increasingly unassailable, and her team’s stronghold on the GC will prove even more difficult to beat, with Moolman Pasio and Vollering currently rounding off the top-three places in the overall.

The team’s nearest rival is now Trek-Segafredo’s Lizzie Deignan, who sits in fourth place, 5:53 down on Van der Breggen.

Asked about the team’s approach to the next few stages, Van der Breggen said some of her other teammates could look for opportunities during the remaining six stages.

“I mean, we’ve been looking until today actually, and then we need to see how classification is, of course. We are also here with Chantel [van den Broek-Blaak] or Elena [Checchini], who are good on the first stages. For sure, they will want to attack also. There are some mountain stages coming up where the other girls are doing great. So, if there are opportunities, then for sure, we will also try to go for stage victories, but also for general, of course.”

At Tuesday’s stage 5, the riders will contest a 120.1km sprint stage that starts in Milano, and after 45km will have three circuits in Carugate.

So You Want a Bike That Can Do It All?