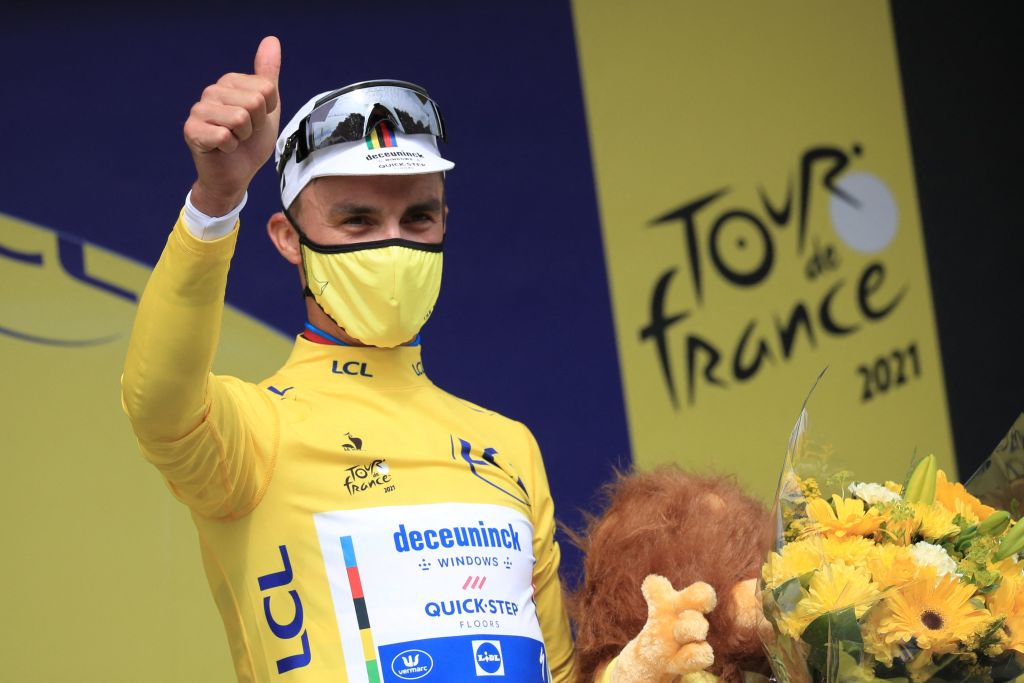 When Julian Alaphilippe (Deceuninck-QuickStep) and his teammates held their pre-stage meeting on Saturday morning in Brest, the reigning World Champion later said he had outlined a simple but devastatingly effective strategy for the 2021 Tour de France‘s first day of racing: “I told them” Alaphilippe said, “I would be racing like there was no tomorrow.”

Nearly five hours later, Alaphilippe’s spectacular solo triumph at the summit of the Fosse aux Loups climb provided complete justification for a tactic that owed much more to the Classics than stage racing – but which paid off in full for the French star.

“Our aim was to put me in as good a position as possible at the foot of the final climb, then ride as hard as possible to put the fast guys who could climb in the hurt zone,” Alaphilippe added, before name-checking “guys like [Mathieu] van der Poel (Alpecin-Fenix) and [Sonny] Colbrelli (Bahrain Victorious). Then as soon as my last domestique had cracked, I was to go flat out – and that’s what I did.”

Quite apart from the last climb, Alaphilippe said his teammates protected him “all the way through as best they could” on a twisting, fraught finale often using narrow, technical roads, and he thanked 2021 Ronde van Vlaanderen winner Kasper Asgreen in particular for his hard work shredding the field at the end of the process.

Knowing the roads well, with a double recon of the final climb and a ride covering the final 60km of the stage earlier in the week surely helped in that build-up. But even being surrounded by teammates could not stop Alaphilippe from becoming entangled in the first big crash of two major mishaps that plagued the Tour’s peloton in the final hour, with his right leg still dripping with blood when he stopped after the finish line to hug his teammates and team staff.

However, he only became aware that a spectator had caused the first crash when he was told about it in the press conference afterwards and asked what he thought about that on a day when fans ‘officially’ returned to the Tour after the easing of some government COVID-19 restrictions.

“Everybody is very happy to see people on the roadsides again,” Alaphilippe said, “But I didn’t know it was a spectator and I would ask all the public to be very careful, too. I was caught up in that crash, too, the gap wasn’t too bad and I got back on. I just hope everybody is OK.”

As if he had aimed to make such a punchy attack with 2.2 kilometres of difficult uphill still left to race, Alaphilippe confirmed his intention had been “to attack from as far out as possible.” But rather than a specific distance for blasting off forming part of the Deceuninck game plan, his idea had been simply to make his move when the opposition was on the collective back foot thanks to his team’s efforts.

“I saw they were all on my wheel, waiting for me to go,” Alaphilippe said. “So I pushed really hard like I always knew I would have to do.”

“It was a long climb, but I could ‘recover’, in inverted commas, on the easier part that came afterwards and hold that gap for as long as I could. When I saw the gap to the rest wouldn’t drop so far that I might lose, I couldn’t have been more delighted.”

Asked whether he believed in the curse of the rainbow jersey, after a year in which he has already taken Flèche Wallonne, finished second in Liège-Bastogne-Liege and won a stage of Tirreno-Adriatico, Alaphilippe, perhaps unsurprisingly, said he never gave it much thought. “It’s added pressure being World Champion, but I try to go on winning.

“I left home just a few days after the birth of my son, and that was very difficult, but I knew what I came here for, and I’ve done that on the first day, so it’s a really great situation. Plus when I lose the yellow jersey, I’ll get a rainbow jersey back in exchange, that’s hardly a bad thing.”

He brushed aside speculation that he can perhaps gain time on Sunday’s Mûr-de-Bretagne summit finish to boost his advantage in the overall standings, currently a 12-second gap over Michael Matthews (Team BikeExchange). Alaphilippe – perhaps hinting at his less ambitious goals for the GC – said that was not a top priority.

“My goal was to win a stage, I’ve won today and tomorrow [Sunday] is pretty good for me as a finish. The last time we went up the Mûr in the Tour I got a top-10 placing, and I did get fifth there in the Tour of Brittany [amateur race – Ed.] once. But it’s not my favourite climb. I’ll do my best but before that, I’ll just enjoy another day in yellow.

“Of course I’ll try to defend this jersey as long as possible, but this is one mission I had here already accomplished. To get the Tour lead in the World Champion’s jersey, on the first day of the race and in what is already a very special year for me – I can’t find the words to describe it.”