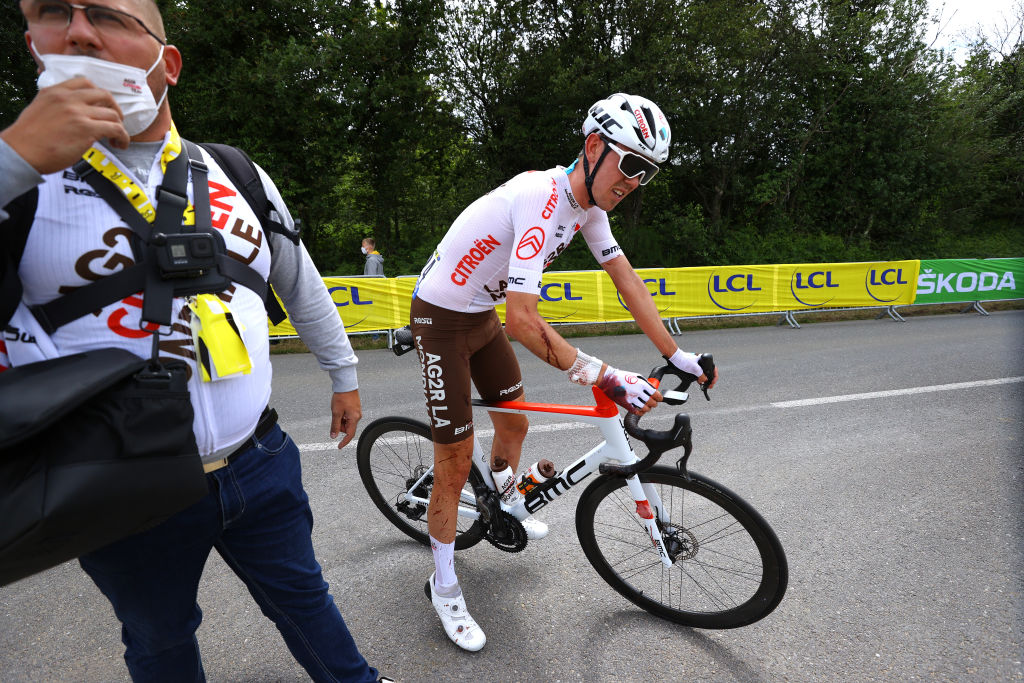 Only one AG2R Citroën walked away from the opening stage of the Tour de France unscathed, and a number of the riders came down not once but twice so now the French team is facing up to stage 2 with a group of walking wounded and a 1:49 deficit for Australian GC rider Ben O’Connor.

The team is far from alone, with the medical update from the race stretching into multiple pages, but among the 21 riders AG2R Citroën easily had the most entries on the list, one top result they certainly wouldn’t have been looking for this Tour.

“It’s a very frustrating day because we’ve been through a disaster scenario,” said team general manager Vincent Lavenu. Seven out of eight riders fell, including all of our leaders.

“It’s the law of sport and we’ll get up and fight. There will still be some beautiful stages still to come, but all the work we did to prepare for the Tour has been undermined. Cycling sometimes brings great joys, but we are not always rewarded in relation to the efforts made.”

O’Connor got caught in the first crash caused by a spectator at 45 kilometres to go in the stage from Brest to Landerneau. It was the very first stage he had ever ridden of the French Grand Tour and, while an X-ray and ultrasound assessment of the right shoulder revealed no serious injuries, he walked away with a deep wound to the right forearm that required about ten stitches.

Nevertheless, he finished the stage in 40th place, 1:49 behind winner Julian Alaphilippe (Deceuninck-QuickStep).

“It’s really frustrating because no one in the pack made a mistake,” O’Connor said. “I fell because a spectator was simply thoughtless, and a lot of riders fell because of her. The first medical check-up reassures me, and I hope to be at the start of the stage tomorrow.”

He’ll not be short on company as he nurses his wounds, with teammate Benoit Cosnefroy, Dorian Godon, Nans Peters and Aurélien Paret Peintre all caught in not one but two crashes, while Michaël Schär and Greg Van Avermaet, were also involved in a crash, although Van Avermaet did not appear to suffer from any major issues.  Oliver Naesen, was the one rider in the team who won’t be joining the queue to have his stage 1 wounds attended to.