Canyon’s Spectral all-mountain bike family just got a lot bigger, with a whole suite of siblings for last winter’s Spectral CF 29. Now there are three wheelsize options – either 27.5″, 29″, or a mullet combination. Next, looking at frame materials, last year’s revamped CF carbon frameset now gets a more affordable alloy version or an ultra-premium unicorn hair CFR Canyon Factory Racing frameset, as well. Great news for trail riders looking for more Spectral options from Canyon, the number of possible frame & wheel combinations went from one just a week ago to six today. Plus on top of all of those, a seventh option drops in a slightly shorter travel 27.5 alloy kids trail bike called the Young Hero to help build the next generation of enduro riders…

Canyon calls this generation of 150mm travel Spectrals, “one of the most versatile trail bikes we’ve ever made. And after having ridden a 2021 Canyon Spectral 29 CF 8 all summer from local singletrack to big alpine bikeparks, that’s an idea I can get behind personally. It’s built to pedal up just about anything, but tested to handle all the EWS racing abuse of their longer travel enduro bikes.

Now, riders looking for one bike to rule them all, have a lot more options to tweak their ideal do-it-all trail setup, and several choices that will save quite a bit of money.

First off, the new Spectral family now comes in three wheel size options: 29″ wheels carry over, new 27.5″ versions are again available in the same modern trail geometry thanks to a new front & rear triangles, and a new mullet option combines the 29er main triangle & fork with the smaller-wheeled rear end. The most impressive part of it all is probably that progressive geometry and travel don’t change at all, no matter what wheelsize you pick, with the curious exception of 3mm higher frame stack on the 27.5 bikes.

The big (or rather small) thing to note there is that the Spectral 29 is available in the same four sizes as when the carbon bike debuted last year (S-XL). But now the new Spectral 27 (eds. 27.5) comes in a smaller four sizes (XS-L) overlapping the 29er to fit smaller riders. Those in the middle essentially get to pick if they want more speed from bigger wheels or more agility from smaller ones. 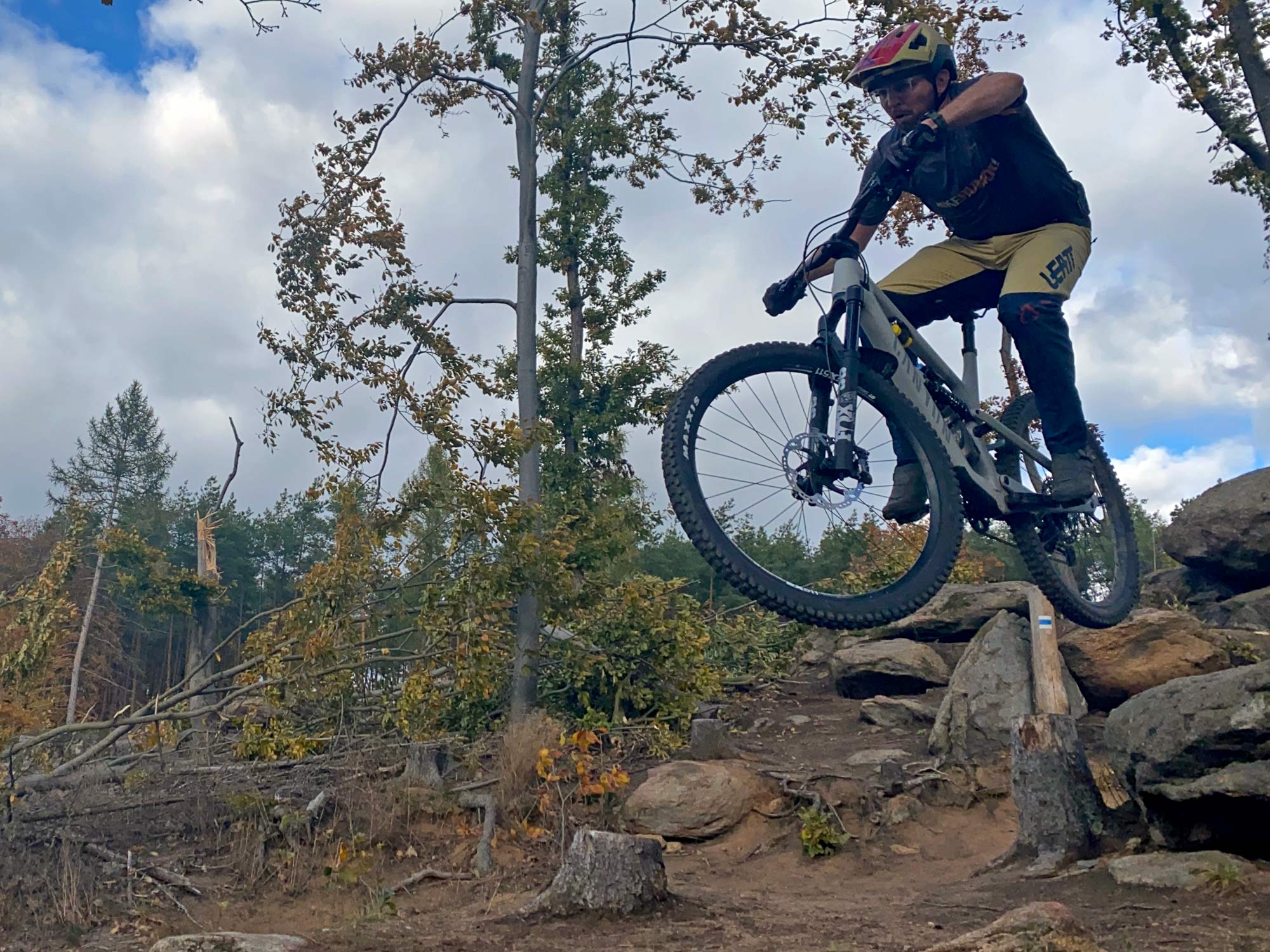 And then there’s the mullet bike for those who want both.

The mullet shares the 29er front end so you get all of the Spectral 29 geometry, plus the 27.5 rear end to keep the bottom bracket height, wheelbase & angles unchanged.

All bikes even use the same shock rocker/linkages, with the same well-proven 150mm of ‘Triple Phase’ four-bar suspension. They take the best suspension kinematics that were updated in the Spectral CF 29 last winter with its progressive leverage ratio, increased bottom-out protection, and extra anti-squat for improved pedaling efficiency with minimal pedal kickback. 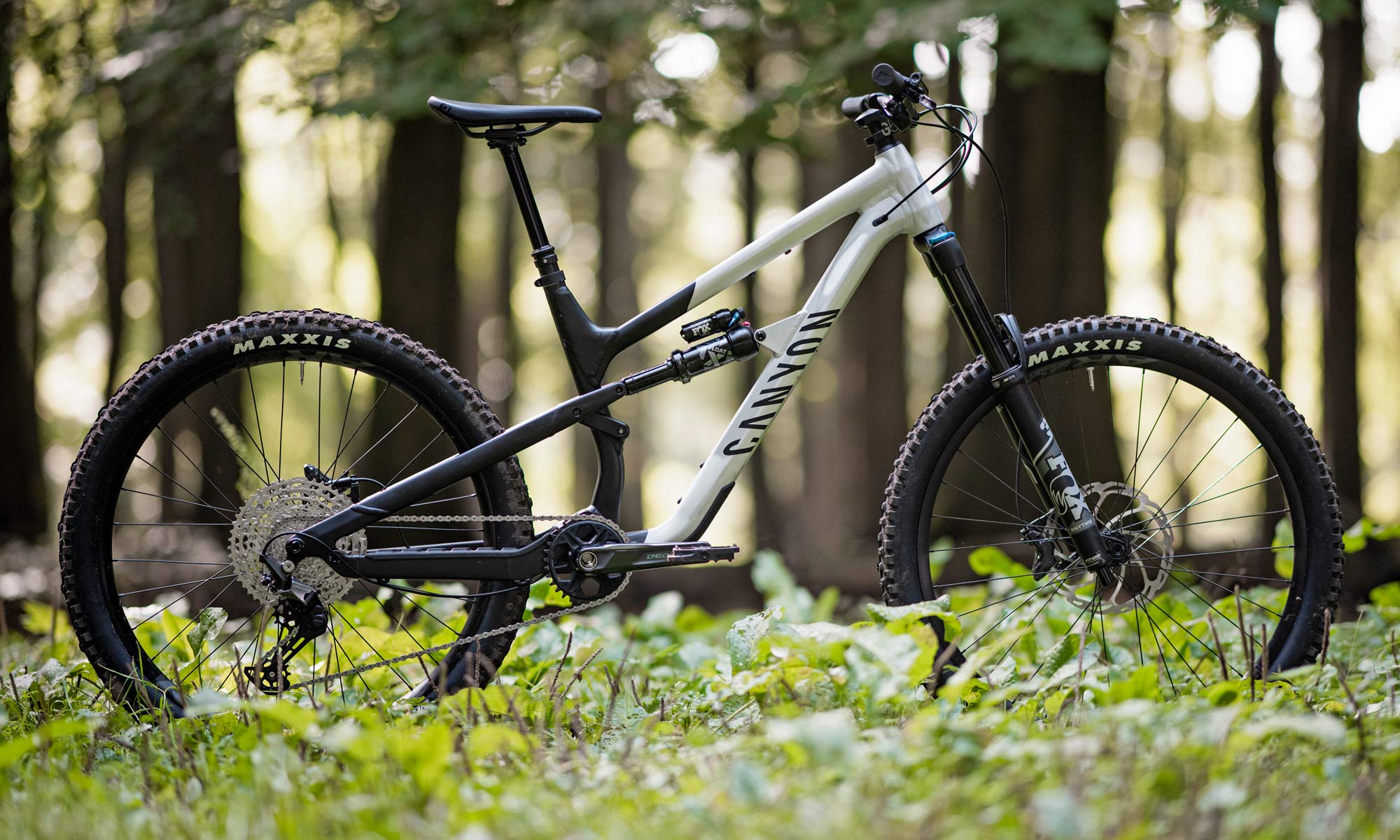 The biggest news in Canyon Spectral land might be the new Spectral AL alloy frameset option. With a claimed frame weight of 3000g (just 400g over the CF), it’s less than a small water bottle heavier than the carbon model, and definitely a lot cheaper. Complete bikes start at just 2500€.

The aluminum bike is available with 27.5 or 29″ wheels (no mullet option), and shares the same overall geometry of the carbon bikes. The one difference here, the alloy bikes do not get the suspension flip-chip adjustability, instead combining the more aggressive LOW bottom bracket & slacker 64° headtube angle position with the HI steeper seattube angle for the best combination of climbing and descending. 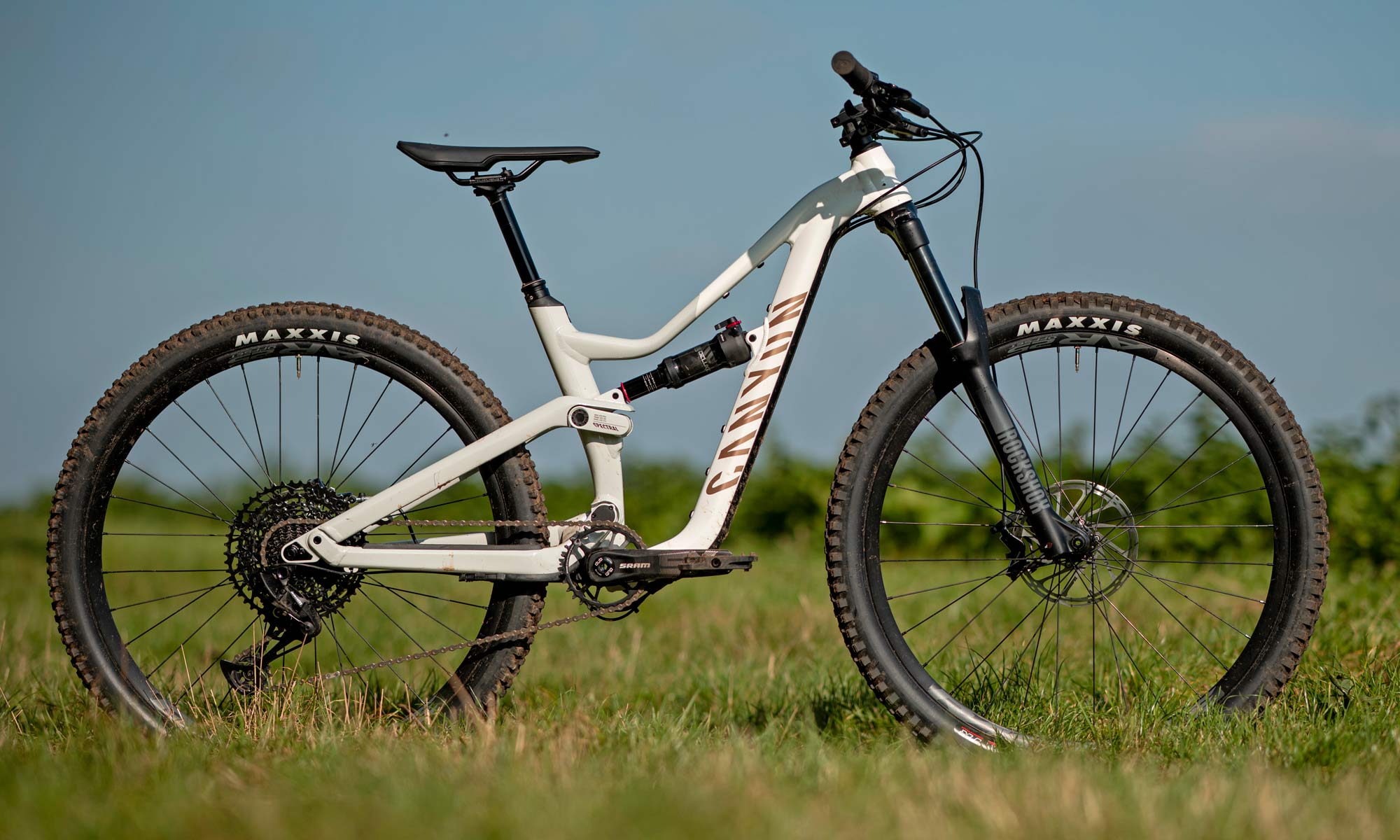 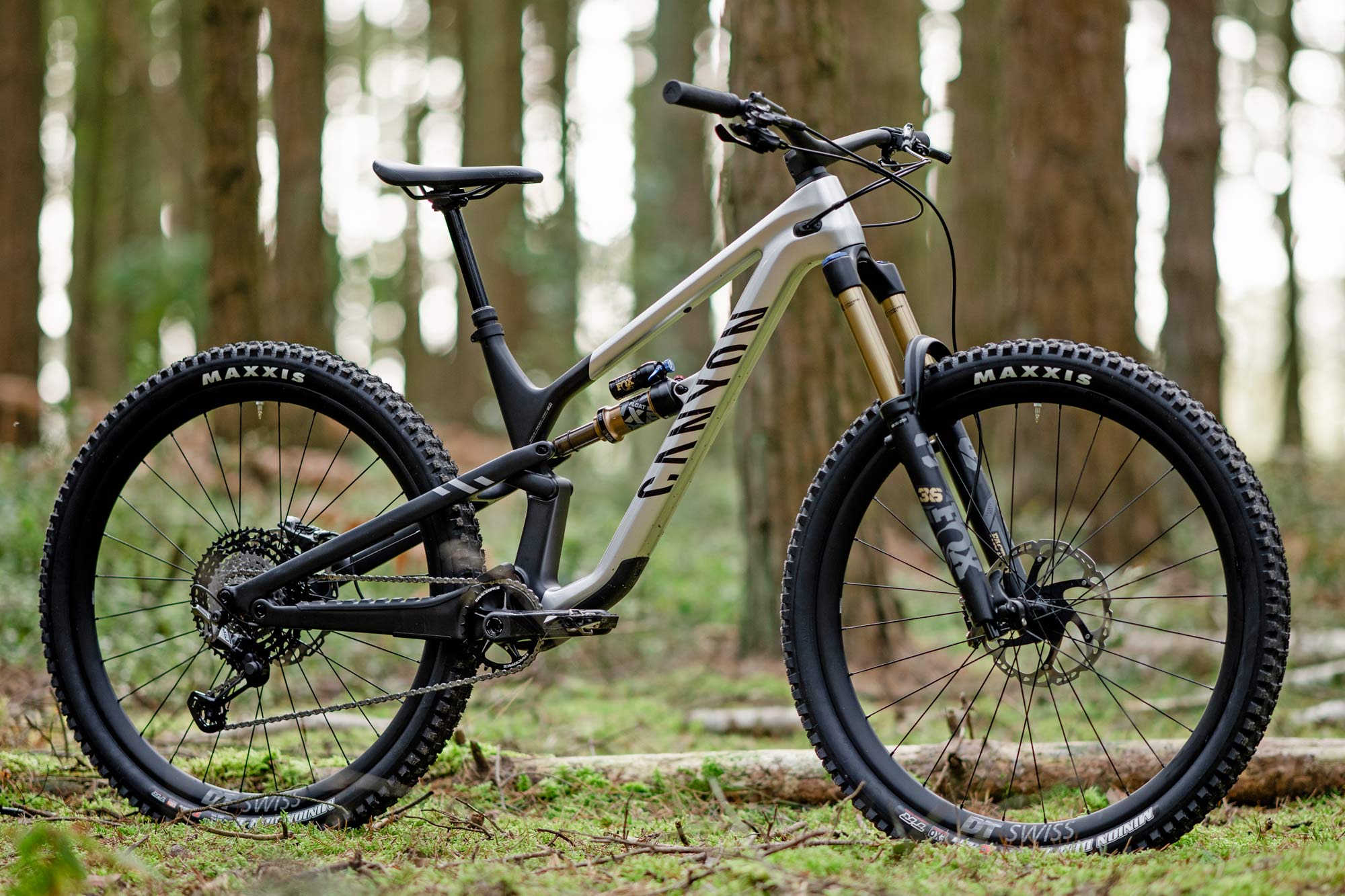 Maybe the sneakiest addition to the 2022 Spectral line-up is this new 29er-only CFR bike, in just one premium build. Built to go even faster than before, it uses Canyon’s top-tier Factory Racing carbon material and more precise layups to shed another 300g off the CF model. At a claimed 2300g for the CFR carbon frame, it’s still just as tough, having even been raced earlier this month at the EWS Tweed Valley in Scotland.

Basically, the Enduro World Series racing CLLCTV team was looking for a lighter-weight enduro bike for faster, less-demanding terrain when then didn’t need the 170mm of the Canyon Strive, and this new Spectral CFR looks to be their new ultralight EWS weapon of choice. 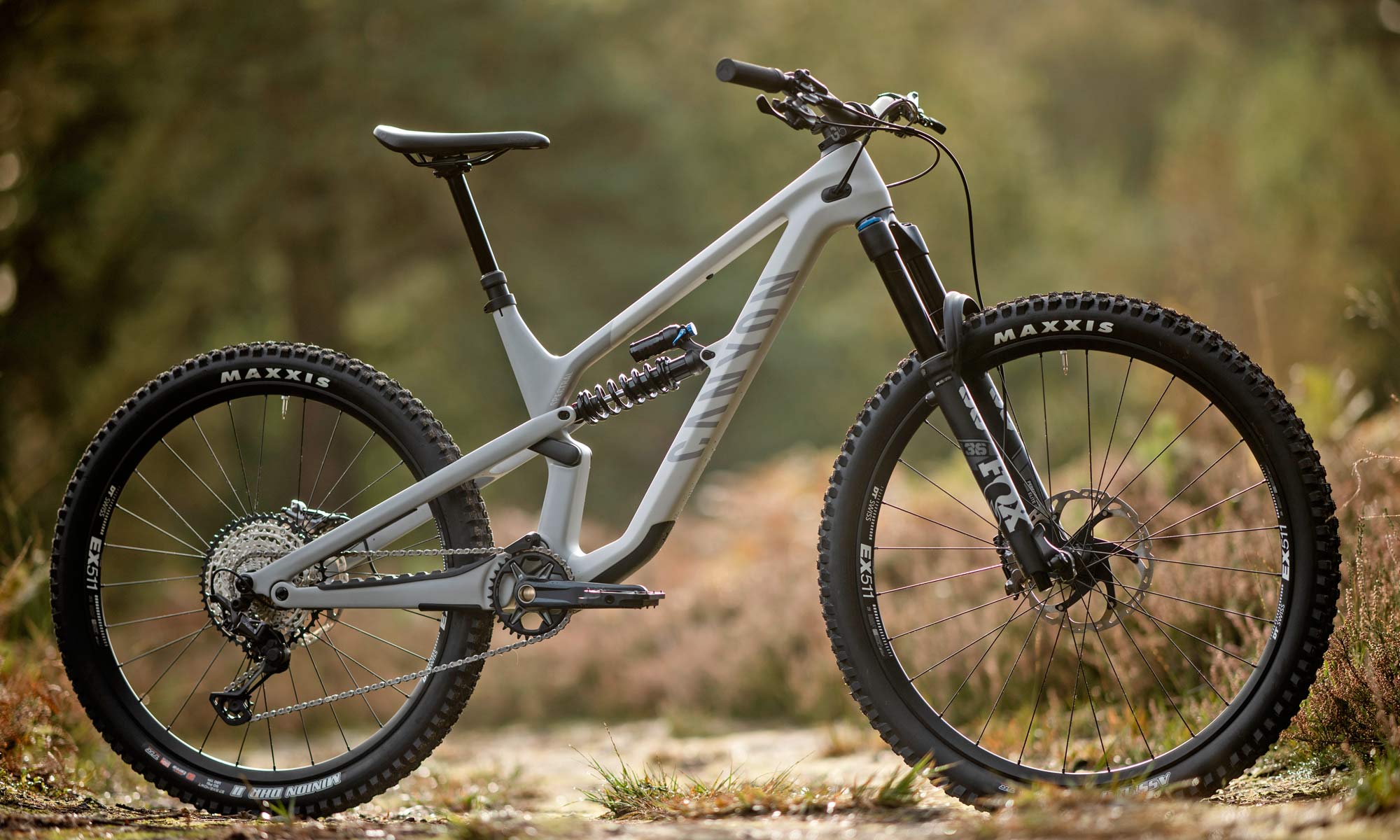 Now the mullet… Mixed wheel sizes have been a debate since the dawn of bigger 29″ wheels (remember the 69ers?), and Canyon decided it was time to bring the Spectral on board to the business up front, party in the back atmosphere.

Only one 4000€ carbon Spectral CF mullet model is being offered for the time being, a special CLLCTV edition with a coil shock out back. While Canyon says they carefully designed the two separate 27.5 & 29″ platforms so it is as simple as swapping out a 27.5 rear triangle to go mullet, they don’t have plans to offer the rear end separately. It seems like Canyon are testing the waters with the Spectral CF Mullet.

But I have to admit, after riding it for a couple of weeks, back-to-back with a Spectral CF 29, the Mullet build does deliver on the playful, rowdy ride. 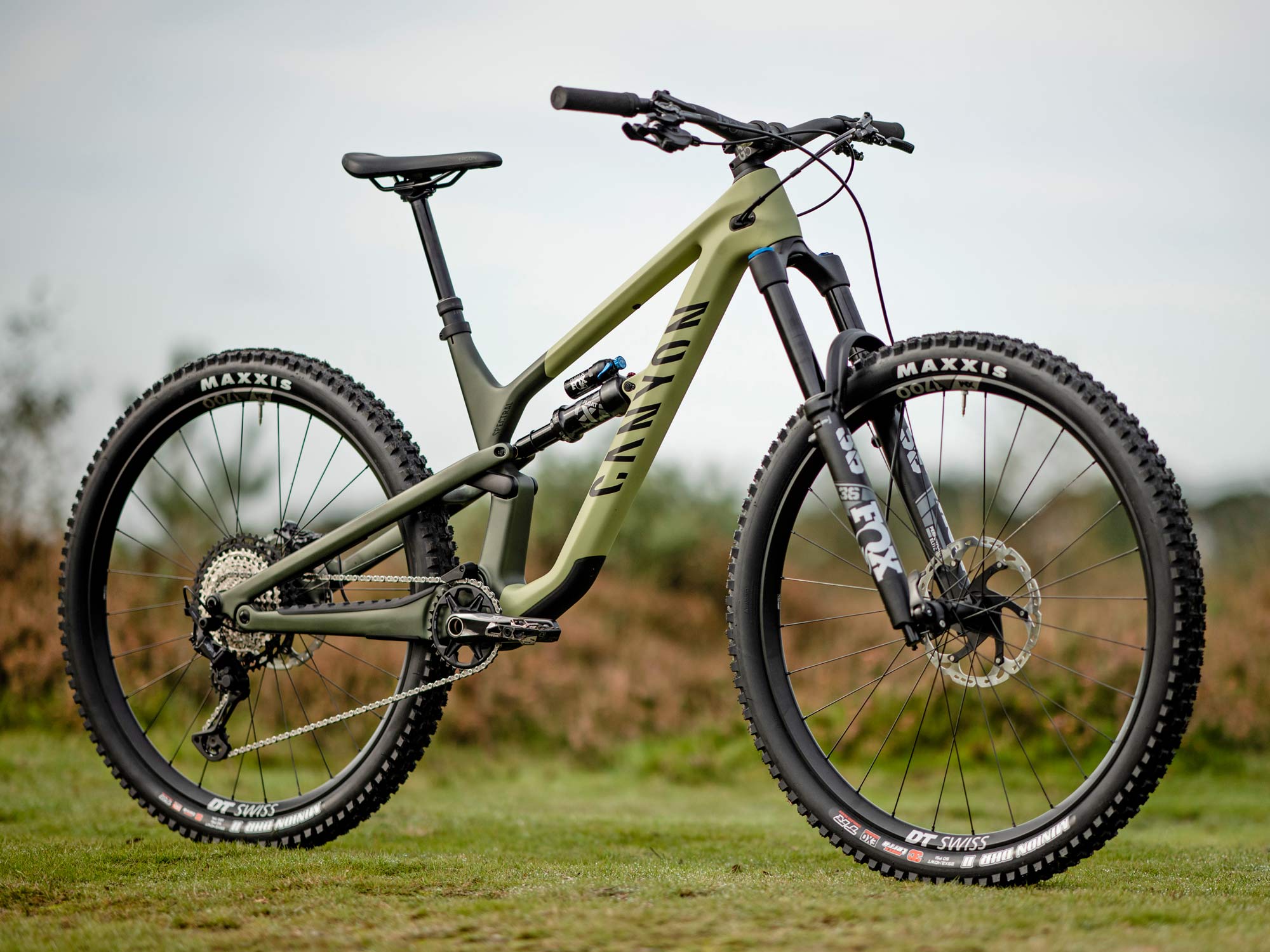 Last but not least, the regular Spectral CF is still here, just like the bike debuted last winter. But, now it adds those four 27.5-wheeled sizes, including the new XS for smaller riders. A solid balance of progressive descending and efficient climbing, the Spectral CF is a hard to beat all-mountain all-rounder. 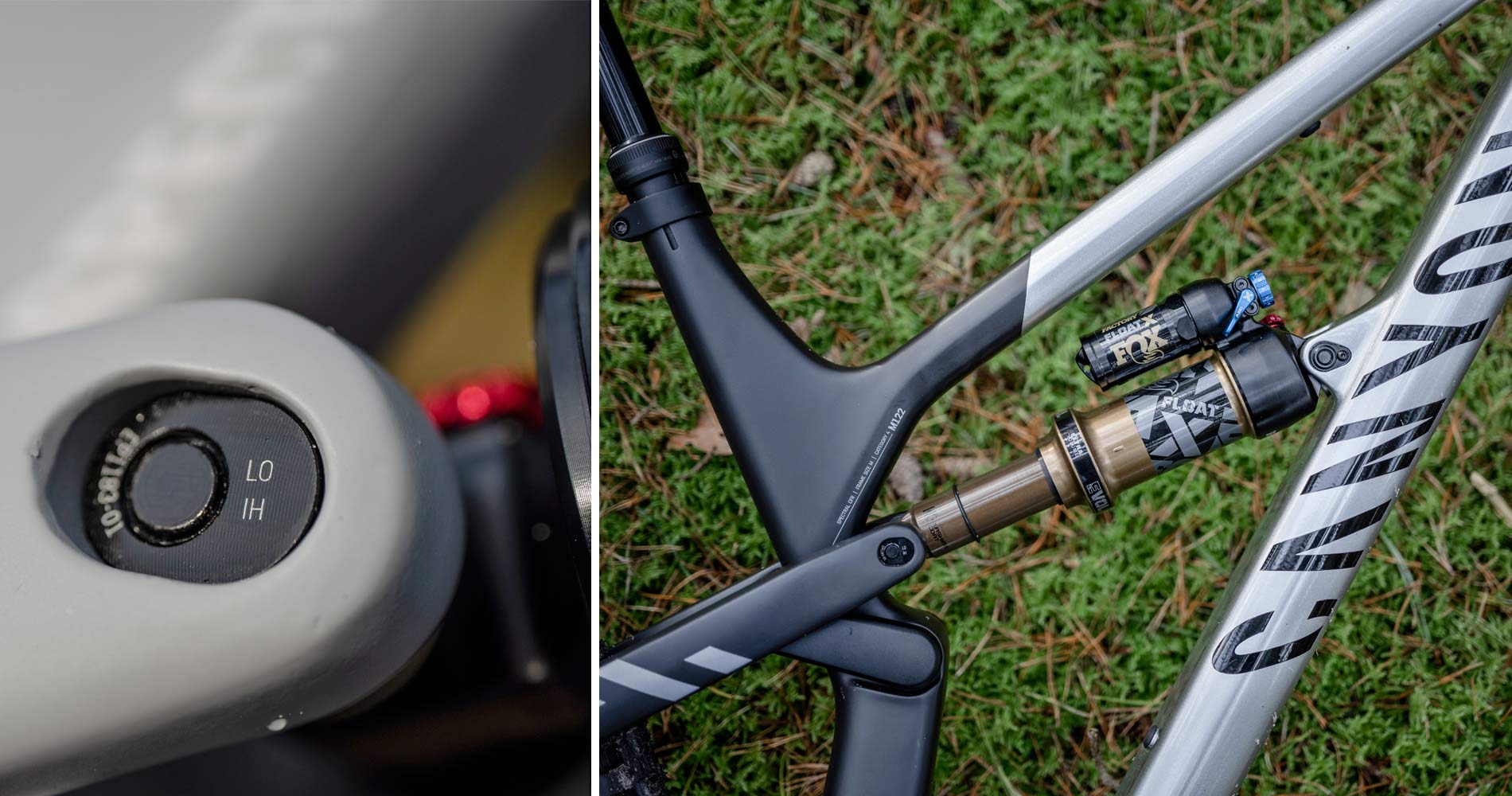 The new Spectrals pretty much all share the same details as the carbon bike debuted last year. In all wheelsizes, the new carbon bikes all get the adjustable geo flip-chip at the rear shock mount, so riders can fine-tune their geometry +/- 0.5° in just a couple of minutes. I generally prefer the higher position which gives an 8mm higher BB to clear rockier trails, while allowing for a plush rear suspension setup.

Not looking to skimp on suspension performance, the CFR model still gets a piggyback air shock, now in a Fox Factory Kashima-coated spec (above, right). But Canyon says they were still able to keep weight down with their lightest, partially bare paintjob for the carbon Spectrals yet. 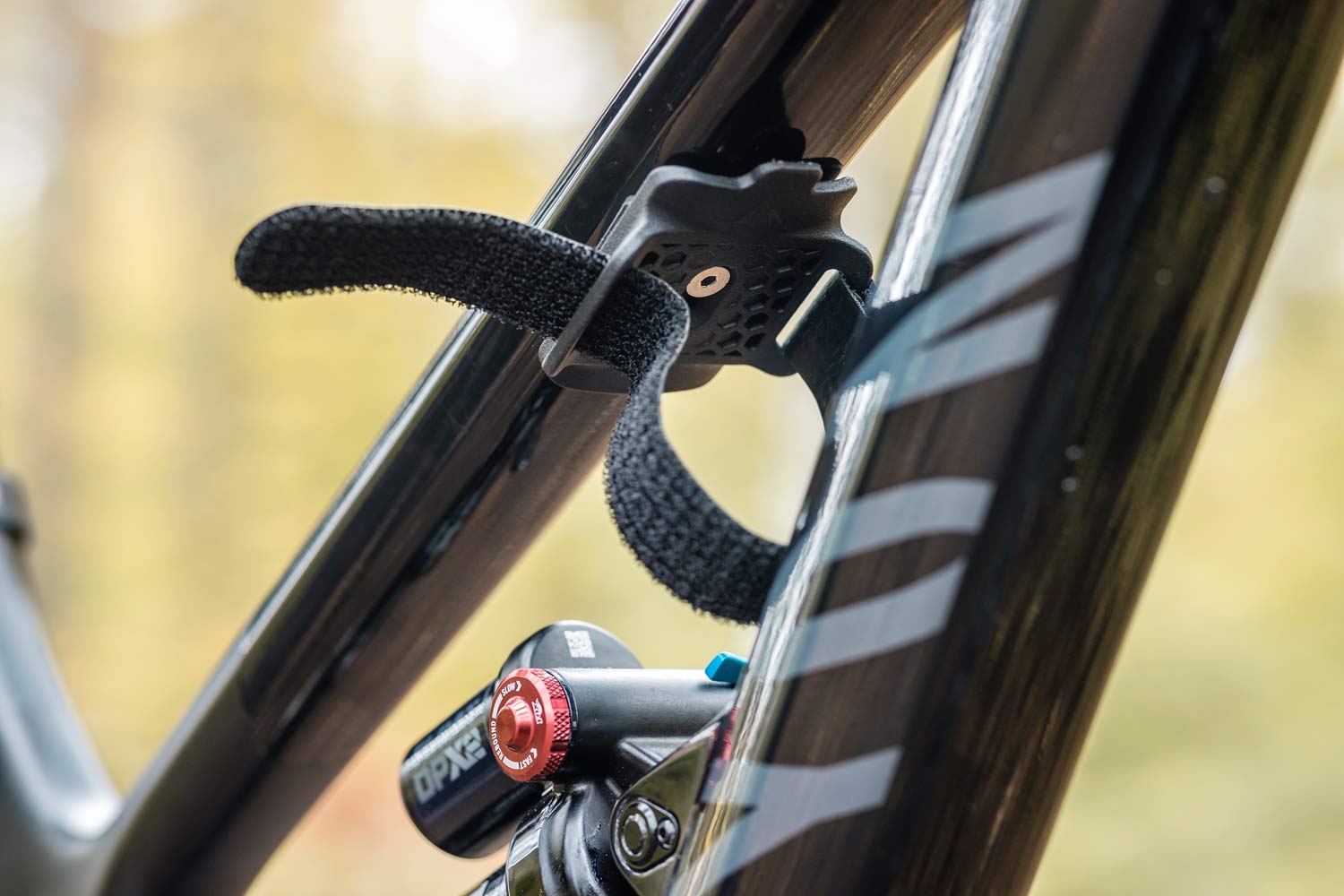 Canyon also carries over the under toptube accessory mount for all of the new Spectrals – from the alloy Young Hero up to ultralight carbon CFR. Canyon sells a small bracket separately that mounts securely to the single bolt, where you can strap on a spare tube & tool. Plenty of options available from other manufacturers will fit too (I use a customizable one made by Syncros.) 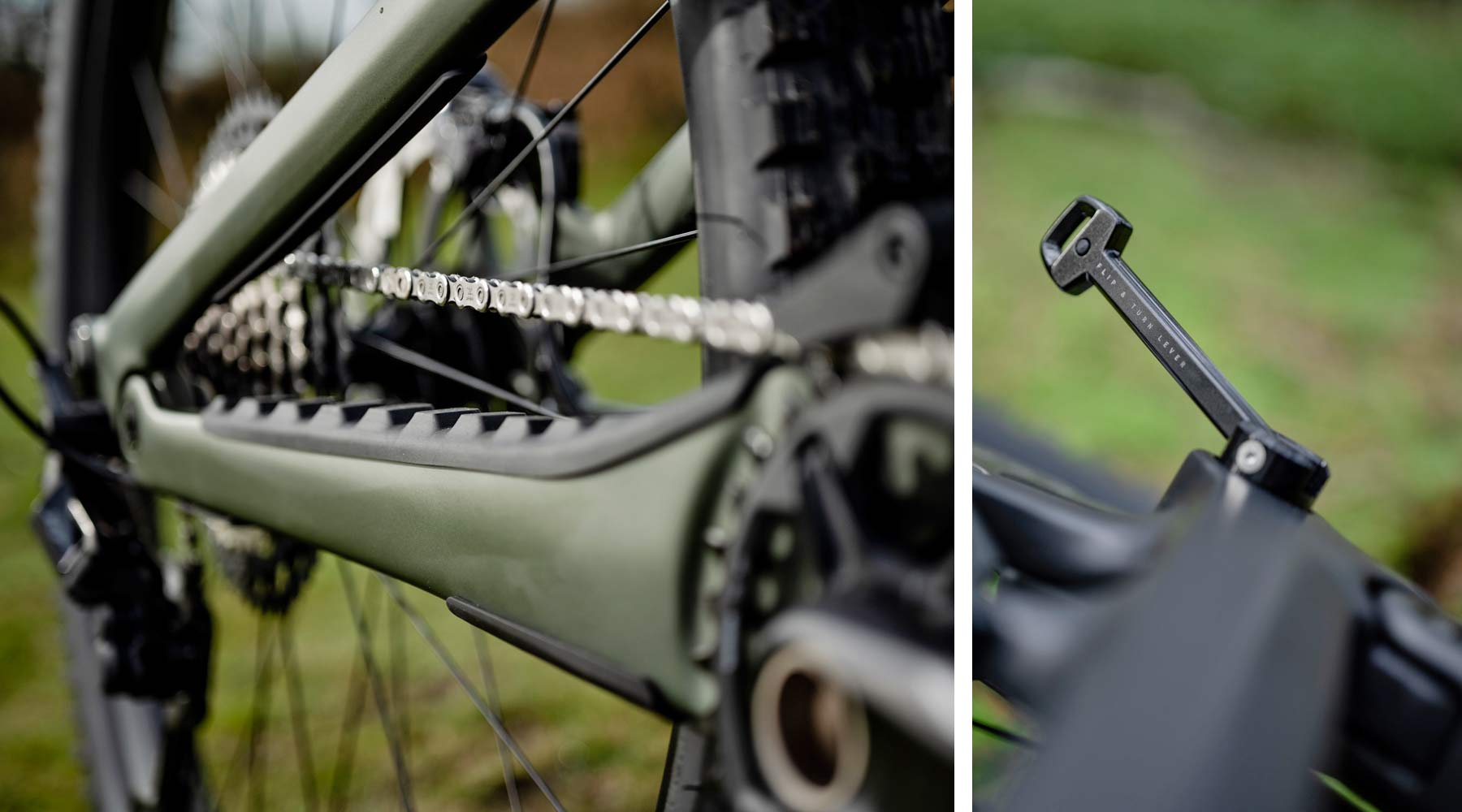 The chunky integrated chainstay protector is still there to quiet the drivetrain on any of the new Spectrals. And all also get Canyon’s clever QR rear thru-axle that tucks its own lever neatly out of the way while riding (securely & rattle-free). 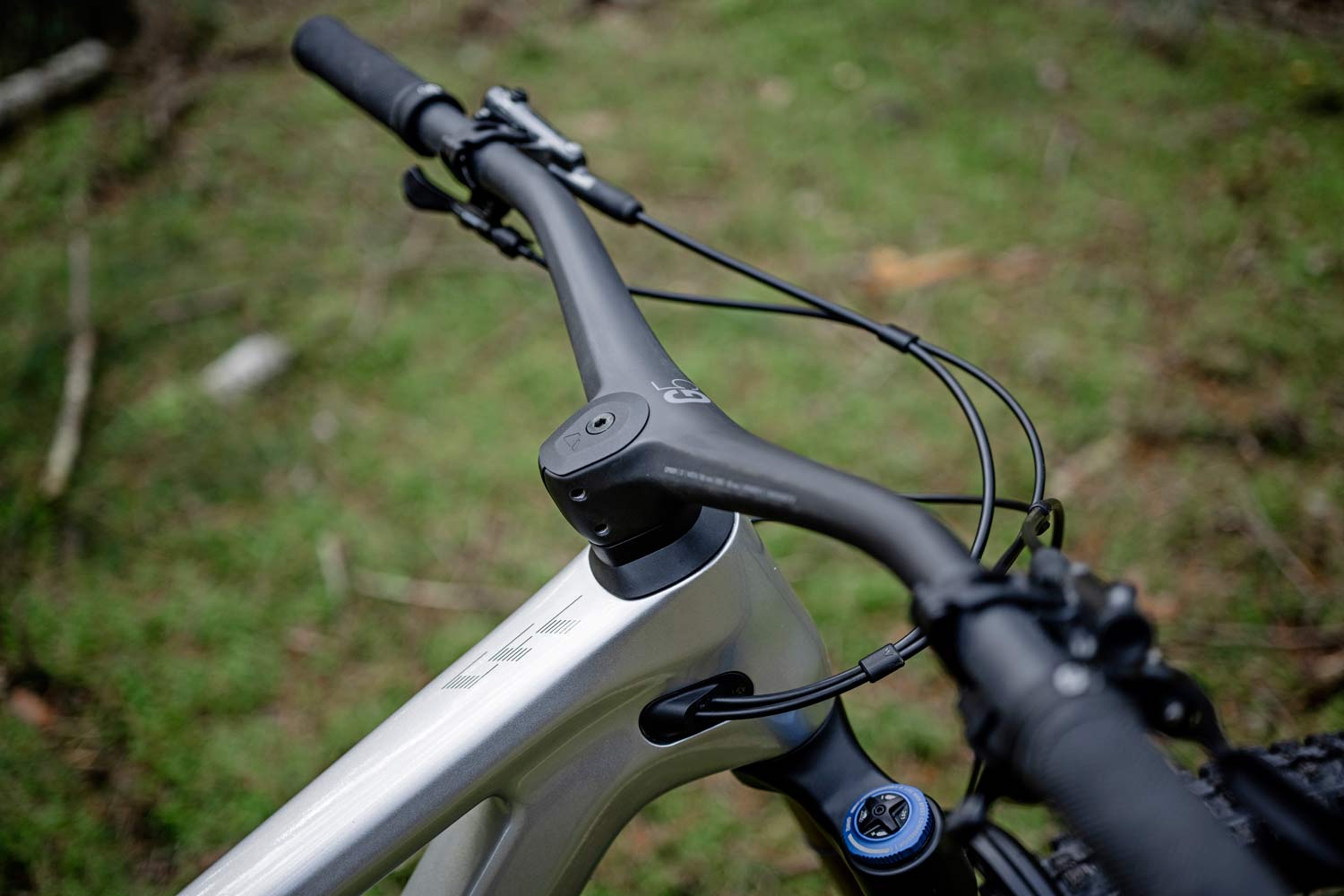 At 6500€, the single Spectral CFR build is certainly the top-tier flagship of the new Spectral family. Canyon claims a complete weight of just 13.3kg for the new ultralight carbon bike. But it’s not shaving weight at any cost, the ethos of the CFR is more about optimizing stiffness, handling & control like in the one-piece carbon CP009 cockpit that’s still built to handle EWS-level racing duties. 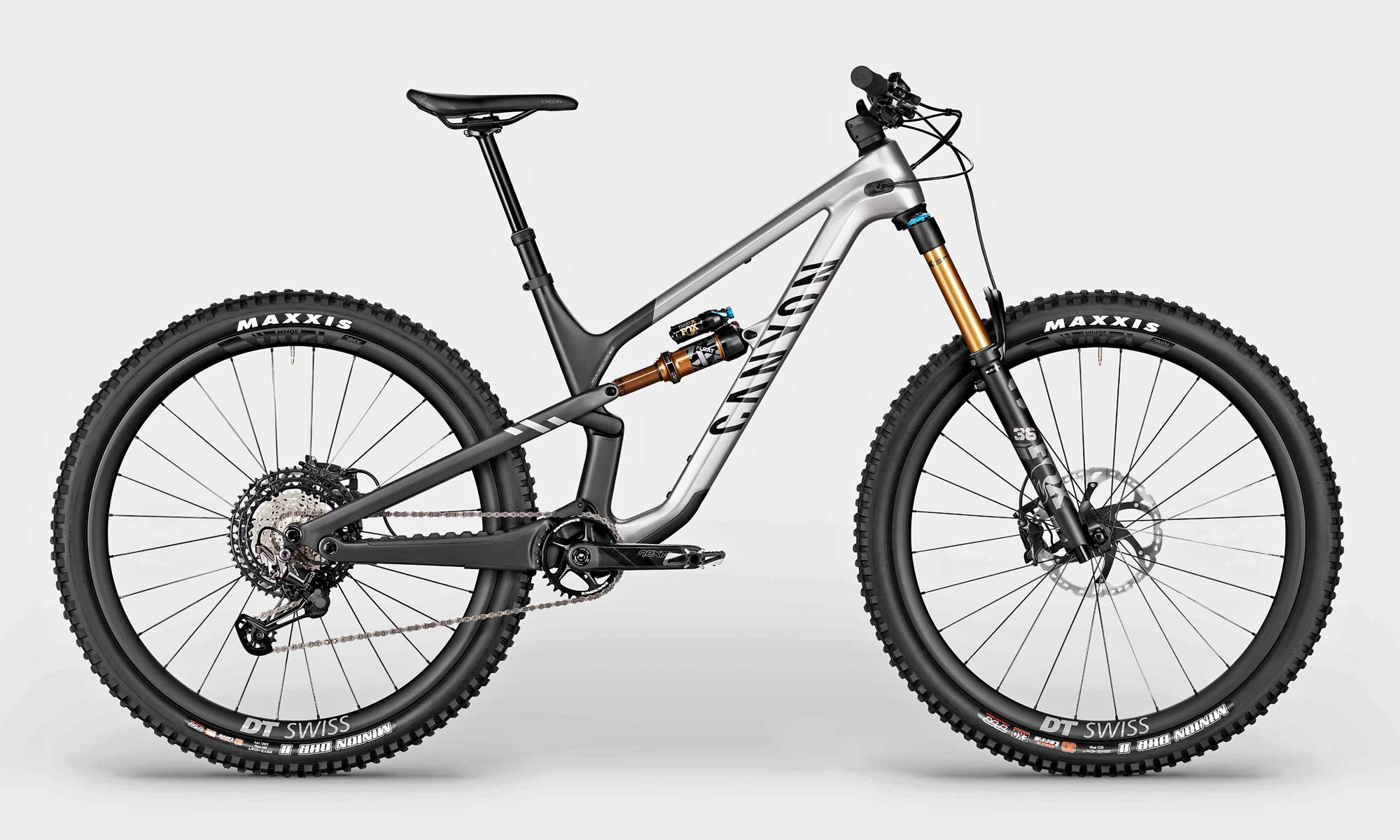 The top CFR build gets Fox Factory air suspension paired with a Shimano XT/XTR drivetrain, RaceFace Next SL carbon cranks, and 30mm internal carbon DT Swiss XMC 1200 wheels. But on top of all that light kit, it still features proper 2.4″ tubeless Maxxis Minion DHR tires with EXO+ casing so you can bomb down any trail with unwavering confidence. 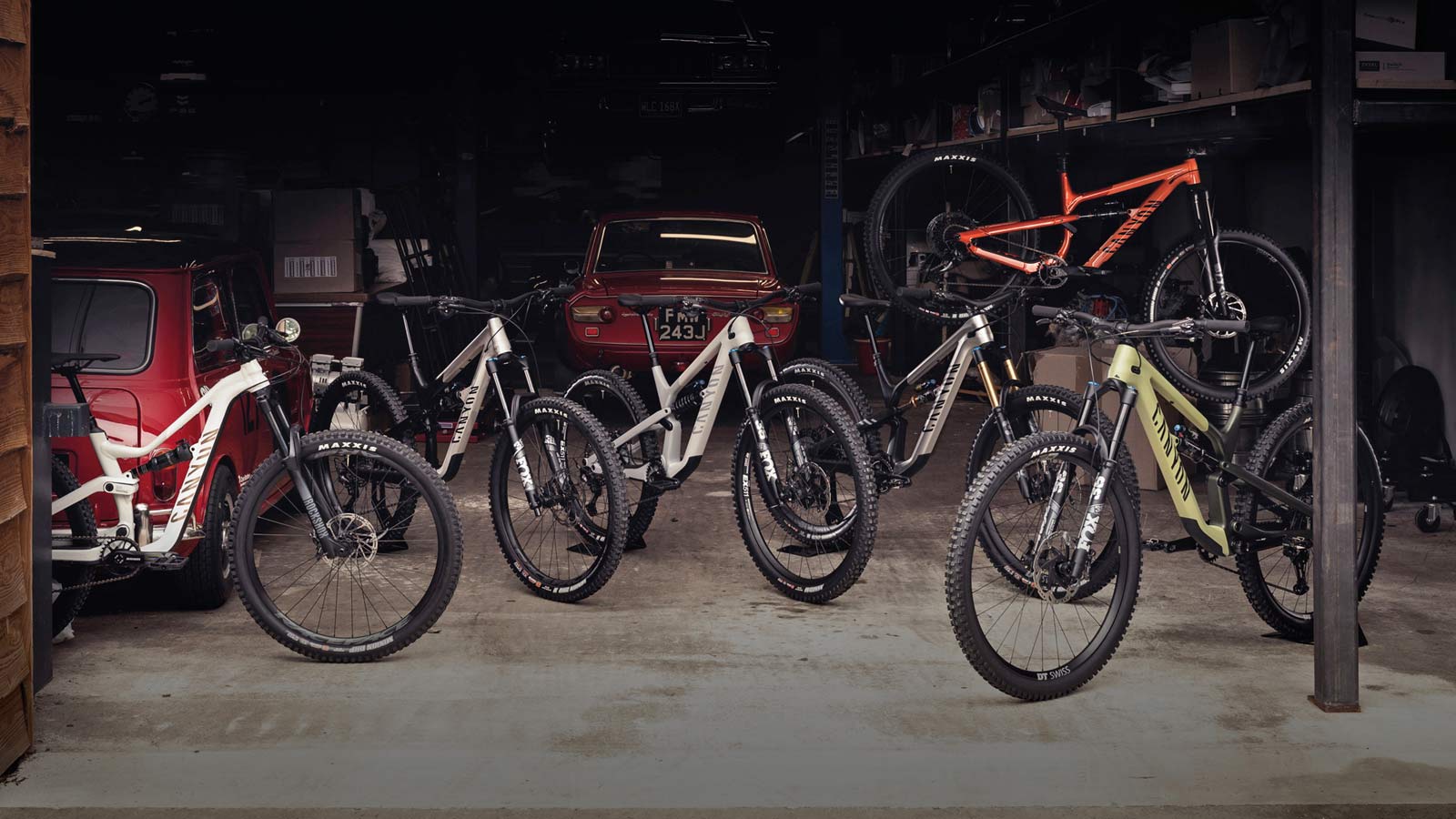 Actual availability does depend a bit on sizing, color, and which build spec you desire, so dig around and see how quickly Canyon can ship a new Any Trail bike to your door.