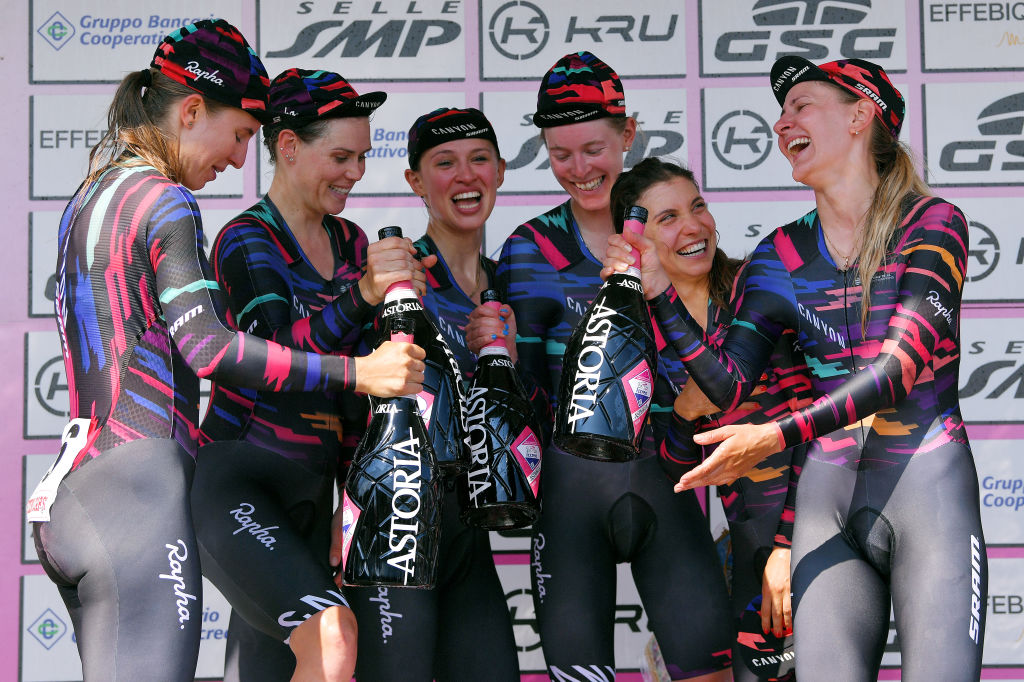 Once the most dominant organisation in the women’s peloton, the Canyon-SRAM team had, at least on paper, the most sluggish season of their 16-year history in 2020, with just one stage of the Herald Sun Tour in their UCI race win column. The results hardly reflect the strength of the team, however, and Kasia Niewiadoma’s fine second place overall in the Giro Rosa, with a pair of stage podium finishes, helped to keep the team in the top 10 of the world rankings.

There were far fewer of the races that suit Canyon-SRAM in 2020 – with most of the stage races on the calendar cancelled because of the coronavirus – but there were a few bright moments for the team last season and with a few important transfers, likely more to come this year.

Chloé Dygert is the highest profile signing, having moved across to the Women’s WorldTeam from the Twenty20 squad, bringing to the team the stature of a former world time trial champion and multi-time track world champion and Olympic medallist. She also brings a staunchly conservative and anti-feminist worldview to a historically progressive team and the reputation for appearing to agree with transphobic and racist statements online. The criticism of Dygert’s social media actions and sub-par apology led to Canyon-SRAM clothing sponsor Rapha taking an unprecedented step to ‘wholeheartedly condemn’ those activities‘.

However, after consulting with the team, Dygert and other sponsors, Rapha concluded that Dygert “has the capacity and the will to listen, learn and to change.” It was an inauspicious beginning to her tenure with the team. In an Olympic year, one expects Dygert to at least steer clear of any further social media controversy.

The win tally tells one story, the ranking tells another. Canyon-SRAM were consistent but just couldn’t get to the top step of the podium in 2020 in a way they have in previous years.

Ella Harris led the way for Canyon-SRAM in the early season, taking a pair of top 10 stage finishes at the Santos Tour Down Under before winning a stage and the mountains classification and finishing fourth overall at the Herald Sun Tour. She went on to claim the New Zealand U23 time trial title as the team’s last success before the coronavirus lockdowns in the spring.

Canyon-SRAM’s focus on talent identification through virtual racing on Zwift paid off during the pandemic-shortened season that saw riders flock to the platform for several high-profile events while the calendar was on lockdown because of COVID-19. Tanja Erath, who came to the team from Zwift Academy, won a stage of the Virtual Tour de France before racing got back underway in July.

The best performances on the road came from Niewiadoma, who won the bronze medal at the European Championship road race and finished just off the podium in La Course by le Tour de France, then hardly put a foot wrong in the Giro Rosa. Canyon-SRAM limited their losses in the opening team time trial to the more powerful Trek-Segafredo and Boels Dolmans teams to just 16 seconds, and Niewiadoma was up into third overall after the second stage behind the dominant Annemiek van Vleuten and Anna van der Breggen.

After Van Vleuten crashed out of the race, Niewiadoma held on to finish second to Van der Breggen, a testament to the support from teammates Elena Cecchini, Omer Shapira, Alena Amialiusik, Lisa Klein and Hannah Barnes, who came second to Marianne Vos on stage 6.

Barnes, Amialiusik and Alice Barnes were the top finishers in the Classics, taking sixth in Liège-Bastogne-Liège Femmes, the Tour of Flanders and the Driedaagse Brugge-De Panne, respectively, while Alice Barnes was the team’s top finisher in the Ceratizit Challenge by La Vuelta in ninth.

Coming away with only one victory plus Shapira’s double Israeli national titles stung, however, and the team found itself lacking as Pauline-Ferrand Prévot had her second year away from her road team obligations due to injury and a focus on mountain bike races.

Kasia Niewiadoma: The Polish rider has been one of the most exciting, aggressive and successful riders in the women’s peloton since she entered the elite ranks in 2013, and landed her first major victories in 2015 with the Emakumeen Bira overall, best young rider at the Giro Rosa and the European U23 road title.

A versatile rider, Niewiadoma excelled in the hilly one-day races, winning the Amstel Gold Race in 2019 and Trofeo Alfredo Binda the year before. She’s won mountain stages in the Tour de l’Ardèche, from the breakaway in the Women’s Tour, landed on the podium in just about every Classic at some point and been the team’s GC leader for numerous stage races.

While Niewiadoma might lack the flat-line speed of a rider like Vos, she’s a fighter and undaunted when going up against riders like Van der Breggen, Van Vleuten and Lizzie Deignan, and always seems to be in the mix.

Chloé Dygert: The American has the potential to be the world’s best rider, having crushed Van der Breggen and Van Vleuten in the 2019 UCI Road World Championships time trial, swept every stage and every classification in the Colorado Classic the same year. On the track, Dygert was part of Team USA’s silver medal-winning team pursuit effort in the Rio Olympic Games, she’s set the world record in the individual pursuit twice, and has piles of rainbow jerseys between the road and track, in the juniors and elites.

Injuries have plagued Dygert, however, and she’s had to battle with ongoing back problems, fought back from a serious concussion from a crash in the Amgen Women’s Race, not to mention the horrifying crash in the 2020 Road World Championships time trial that left her with a huge laceration across her quadriceps.

Dygert has posted updates on her recovery, showing steady improvement in her mobility and strength, and has vowed to do “anything” to heal before the Olympic Games, where she will likely be a medal candidate on the track and in the individual time trial.

Where she will fit into Canyon-SRAM’s goals in between is uncertain. Her palmares in the European peloton are limited, but her fourth place in the 2019 Worlds road race showed both promise and inexperience – though to be fair, few expected Van Vleuten to go solo with 100km still to race. Whether she will fit in with the culture of the team remains to be seen.

Mikayla Harvey: One of the most exciting young talents in the women’s field, Harvey comes to Canyon-SRAM after the dissolution of Equipe Paule Ka, and their loss is certainly the German team’s gain. Harvey burst on the scene this year, winning the best young rider’s classification at the Giro Rosa and finishing fifth overall. The result built upon an extensive and solid 2019 that included a time trial victory at the Tour de Bretagne Féminin and a similarly ambitious 2018.

“Mikayla is one of the shooting stars of the season and has made big steps forward. Her results in mountainous races were exceptional, even better when put in context to her young age,” manager Lauke said.

Although Harvey admits she still needs to improve on positioning, especially in the Belgian Classics, 2021 could be the year the Kiwi puts it all together and when she does, watch out.

Alice and Hannah Barnes: The British sister act represents the two sides of Canyon-SRAM in 2021 – Hannah, 27, is a keen sprinter whose speed was honed through years on the track and who is an important engine in team time trials brings seven years of experience. Alice, 25, represents the team’s promise, coming up through the mountain biking ranks. She joined her sister on the team in 2018 after two years with Drops.

Both have been British champions multiple times – Alice is the current road and time trial champion – both were part of the team’s 2018 World team time trial title, and both have proven capable in shorter stage races. Hannah claimed the 2018 Setmana Ciclista Valenciana and a stage of the 2016 Giro Rosa, while Alice has won stages in the BeNe Ladies Tour and Thüringen Ladies Tour, and both are important support riders for Niewiadoma.

Canyon-SRAM lost six riders, including Ferrand-Prevot to the mountain bike circuit, sprinter Elena Cecchini to SD Worx and Erath to Tibco-Silicon Valley Bank. They gained Dygert, Harvey, Elise Chabbey, and Neve Bradbury from the junior ranks and kept their core of experienced riders, including Tiffany Cromwell, Alena Amialiusik, Omer Shapira, sprinter Alexis Ryan, and stage race specialist and German time trial champion Lisa Klein. Riders like Ella Harris, Hannah Ludwig are still on a development path but with the influx of new talent, Canyon-SRAM have a solid team behind Niewiadoma. In manager Ronny Lauke, they have one of the most experienced leaders in women’s cycling, too.

The team are lacking a bit in the sprints. Although Ryan beat notable sprinter Jolien D’hoore in the 2018 Drentse Acht van Westerveld and came second to Amy Pieters in the Ronde van Drenthe and second in Omloop Het Nieuwsblad the same year, she hasn’t enjoyed the same kind of success since early in 2019. Ryan says she’s coming into 2021 “with rediscovered purpose and motivation”. Hannah Barnes has struggled with consistency, while Alice Barnes admits she still has room for improvement. All three riders have potential and motivation in the sprints for the coming season.

Canyon-SRAM struggled to live up to the potential of their roster in 2020 but 2021 is a new year and presents ample opportunities (pandemic aside) for the team to pull it all together. With Dygert, the team gain a huge engine with massive potential for the European calendar and a welcome card to play along with Niewiadoma, but will have to work to avoid any further social media pitfalls. Having a talent like Dygert in a team can motivate and inspire her teammates and raise everyone’s game, but only if she can integrate well with the already established culture.